“We are a creative practice composed of architects and multidisciplinary designers challenging the built environment in dynamic ways. We integrate art, design, culture and technology to create novel and exciting social experiences that embrace the public realm and empower positive interactions amongst communities.”

ESKYIU is a multi-disciplinary architecture studio that explores how Architecture intersects with transformative cultural landscapes, media, products, print, experimental fabrication systems, educational tools and social sustainability.  Founded in New York by Eric Schuldenfrei and Marisa Yiu in 2005, they established the Hong Kong studio-office in 2007. Their architectural practice operates in an open and collaborative environment, at various scales (product-objects to urban scale projects) working closely with various disciplines in a rigorous and sensitive manner.

ESKYIU seeks to design a possible future that responds to everyday needs while also referencing the past by creating a design and research practice actively integrating culture, art, community and technology. Their interest lies in examining the ways in which the built environment and constructs of labor shape social relationships by forming connections between civic engagement, social values and sustainable design. In utilizing modest approaches they seek methods that use architecture, animation, art, and technology as a means to engage the larger public. Their tools examine, propose and advocate for change in how resources are used, managed and deployed. Challenging and rethinking how architecture plays a role in the city and global networks specific to the two sites they work and research in. Their projects range from filmic research of unique architectural spaces, media narratives, interactive public installations, manufacturing models to curatorial projects that deal with cultural education, social sustainability and community participation. Such projects involve collaborative operational techniques that bring different disciplines together to experiment in creating new possibilities.

Media and changing social structures are research generators for the projects because they force one to question the role of the architect as a citizen, as a social connector, and a spatial designer that forms an active dialogue with the larger public. By exploring media that is capable of constant change such as interactive environments, real-time software, and responsive materials, their work responds to the local community by treating the neighborhood as a laboratory to examine the dynamic functions of both renewal and preservation. Researching the space of a mainland Chinese manufacturing complex provides inspiration which propels further investigation into innovation and sustainable manufacturing techniques to explore new forms of social capital and community based structures. Applying knowledge of China and relating it back to New York’s Chinatown reveals the reality of policy, historical legacy, and design aesthetics integrated into the complex network of the two dense global regions ESKYIU operates within.

They were awarded the prestigious ‘Architectural League Prize’, Architectural Record’s Design Vanguard, Design for Asia Award, Perspective’s ‘40 under 40’; curated the 2009 HK & SZ Bi-City Biennale; exhibited widely such as the Venice Biennale; lectured internationally such as the Harvard’s AsiaGSD conference, TEDx, V&A museum, the Asia Society to Universities world wide from Nanjing, Finland to Cambridge. Recently they published INSTANT CULTURE: Architecture and Urbanism as a Collective Process, designboom reviews the book as “a provocative deliberation that question regional values, cultural consumption, architecture, environment and global pressures faced by Hong Kong, but which apply to many urban centers ”. 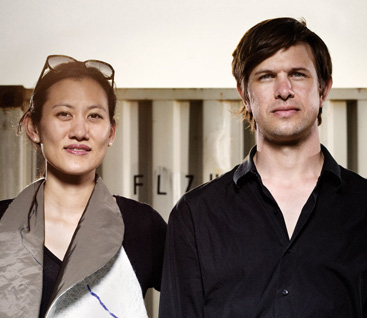 Eric Schuldenfrei, Founding Partner of ESKYIU, is a designer who focuses on the evolving relationship between architecture, animation, technology and art. His past projects include an art installation commissioned by Agnes Gund, President Emerita of MoMA; multi-media projects for Salvatore Ferragamo ‘Walk of Style’; and computer animations for Diller + Scofidio and The Builders Association’s Obie Award winning multi-media theatre work ‘Jet Lag’. Other work includes animated sequences for the PBS American Masters ‘Henry Luce and the Making of the American Century’ and public projects for Lincoln Center together with Diller Scofidio + Renfro. ESKYIU architectural projects completed with his partner Marisa Yiu have been featured in many international biennales: ‘Urban Pastoral’, an architectural installation created for the 2008 Venice Biennale;  ‘Human Motor: Narratives from the Assembly Line’ in Ljubljana;  ‘Mediated Labour’ for the 2007 Hong Kong- Shenzhen Bi-City Biennale and ‘Aqua Industry’ for the 2011-12 edition.  A video installation ‘The Measure of All Things’, in collaboration with artist Haluk Akakce, was exhibited at Casino Luxembourg; Kunst Werke, Berlin; The Museum of Modern Art, Frankfurt; and the Centre d’art Contemporain, Geneva.

Schuldenfrei received a Bachelor of Architecture from Cornell University and a Master of Philosophy from the University of Cambridge, and completed his PhD from Cambridge in ‘Architecture and the Moving Image’. He taught at Princeton University for six years; Columbia University Graduate School of Architecture, Planning and Preservation; University of Pennsylvania Graduate School of Fine Arts; and at the Architectural Association, where the work has been published in MIT Thresholds. His design projects have been featured in Wallpaper*, Surface Magazine and TIMEOUT’s Designers You Need To Know. Schuldenfrei served as the Curator for Exhibition, Education, Film, and Media for the 2009 HK SZ Bi-City Biennale of Architecture\ Urbanism at the West Kowloon site. Recently he has presented and lectured at the Cumulus Helsinki Conference as a Keynote speaker; DLD Moscow on the topic of Future Cities; the Harvard University AsiaGSD lecture series; University of Michigan; Cranbrook Academy of Art; the University of Cambridge; and at the V&A museum in London.

Marisa Yiu, Founding Partner of ESKYIU,  is an architect who integrates  multi-disciplinary design, culture and spatial agency. She has been examining issues relating to the cultural landscape of Hong Kong since 2000. Her essay ‘Image Construction: Hong Kong since 1967-8’  published in LOG Journal examined Hong Kong’s relationship to the Pearl River Delta and global networks. Yiu served as the Chief Curator of the 2009 HK SZ Bi-City Biennale of Architecture\ Urbanism- curating over eighty exhibitions and spearheading inventive events located at the West Kowloon Cultural District waterfront. Her past works include community driven projects such as ‘Brandspider’ for Whitney Museum ISP exhibition;  ‘Place Markers’ with placeMatters, New York; and Chinatown Design Lab. Along with her partner Eric Schuldenfrei of ESKYIU their  projects include ‘Chinatown WORK 2006’ an interactive public arts project commissioned by the Lower Manhattan Cultural Council and The Department of Cultural Affairs in New York City; ‘SINO’ shown at the Brooklyn Museum; ‘Nutritious: an aeroponic facade’ exhibited at Architectural Association in London, and ‘Urban Pastoral’ for the 2008 Venice Biennale.  Prior to establishing ESKYIU, Marisa has worked on international renowned buildings and urban developments at Kohn Pederson Fox Associates PC (NY),  Marble.Fairbanks Architects (NY), and taught in Spain with Ben Van Berkel and Caroline Bos of UNStudio.

She received her Bachelor of Arts from Columbia College, Columbia University (New York) and a Master of Architecture from Princeton University. Yiu is a licensed architect in the state of New York, AIA architect member, an associate member of the HKIA, served on the Board of Advisors of RTHK (2010-2016), former Board member of the registered charity of the Hong Kong Ambassadors of Design (HKAoD, 2008-2015) and instrumental in leading the establishment the DESIGN TRUST initiative of HKAoD since 2014, as the co-founder. In 2016, she became the Executive Director driving the DESIGN TRUST FUTURES STUDIO cultural and community programmes and the growth of its associated programmes in HK, Greater Bay Area and internationally.

– Eric Schuldenfrei and Marisa Yiu launched ESKYIU PLAYKITS, a retrospective celebration that looks over ten years of creative journey at ESKYIU on 2018.

– Marisa Yiu and Eric Schuldenfrei moderated for Business of Design Week, 2017, Culture and the City Forum.

– Marisa Yiu was invited by the Naomi Milgrom Foundation to speak at the inaugural Living Cities Forum, Melbourne, Australia.

– Marisa Yiu and Eric Schuldenfrei moderated for Business of Design Week, 2016, Culture and the City Forum.

– Marisa Yiu and Eric Schuldenfrei spoke on July 30th 2016 in Shenzhen-at a sympoisum organized by The American Academy in China(AAC) on “Rural-Urban Re-inventions: Bridging the Gap Between China’s Cities and Countryside.”

– Marisa Yiu and Eric Schuldenfrei moderated and spoke respectively at the THIS IS MY CITY 2015- The Creative Festival programme, the ‘TIMC Conference| CREATIVE ECONOMIES: THINKING, DEVELOPING, MAKING, and INVESTING’ in Macau.

–  Eric Schuldenfrei and Marisa Yiu received a Design For Asia award 2015 for their Ephemera installation under “Culture, Public and Exhibition Spaces” category.

–  ESKYIU founders Eric Schuldenfrei and Marisa Yiu received the Design Vanguard 2014 award selected by Architectural Record. In its 15th edition, Design Vanguard showcases emerging firms from around the world that are expanding the role of the architect by championing new approaches to design and practice.

–  ESKYIU received Design For Asia Award 2014 Bronze for their Ido Portal installation under the “Culture, Public and Exhibition Spaces” category. DFA Awards is presented to designers from around the world that has an impact on the Asian lifestyle, selected by expert judges as part of a blind jury process.

–  Eric Schuldenfrei was awarded the prestigious Graham Foundation Grant. Founded in 1956, the Graham Foundation for Advanced Studies in the Fine Arts makes project-based grants to individuals  to foster the development and exchange of diverse and challenging ideas about architecture and its role in the arts, culture, and society.

–  Eric Schuldenfrei was awarded the Outstanding Teaching Award from the University of Hong Kong. This prestigious award honours academics and teachers for Excellence in Teaching and Research. Achievements and contributions of the awardees demonstrate attainment in excellence in teaching and engagement with students and their learning, curriculum design, renewal and innovation.

–  ‘40 under 40’ awards, 40 design professionals under the age of 40 in recognition of excellence in, and outstanding contribution to the field of  architecture in Greater China, Perspective Awards. ESKYIU: Eric Schuldenfrei and Marisa Yiu